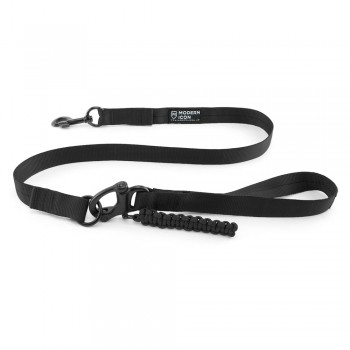 Modern Icon Tactical Deployment Lead SKU K9TD The Modern Icon Tactical Deployment Lead (TDL) provides the operator with a reliable hands-free option that’s built to last and won’t get in the way or generate unintentional feedback to their dog. Traditional hands-free systems include an internal bungee cord to prevent the dog from tugging on the handler, which affects the handler’s sight alignment and shot placement. The downside is that the dog is getting near constant feedback from the tension on the bungee. The decision to leave the bungee out came from input we received from handlers wanting a hands-free option that didn’t generate that unintentional feedback to their dog. This design allows enough slack for your dog to be in a heel on either side. The other benefit is that the handler can give feedback to their dog by pivoting their hips to take up the slack and tension on the dog. To attach the lead to the handler, we use a heavy duty Quick Release Snap Shackle that’s strength rated for climbing applications. Instead of the standard belt loop system found in similar designs, Modern Icon crafted an industry first design. They took their cue from daisy chains used in operational climbing and rope rescue and created a large sewn loop out of mil-spec climbing rated webbing. This allows the handler to simply thread the bite of webbing through any spot on their duty belt or through Molle on their chest rig and simply pass the snap shackle back through for a secure attachment point. The snap shackle will also work with any of our 4 foot, 6 foot, or waist leads by clipping through the 1.5″ clip-in points on the leads body. FEATURES MULTIPLE ATTACHEMENT OPTIONS Our unique attachment solution allows you to affix the TDL Shackle to 2" wide duty belts as well as Molle loops. STATIC LEAD The use of a static tether prevents unintentional feedback to your dog, while still allowing some freedom of movement in a close heel SHACKLE RELEASE TAB The strength rated Shackle has a 4" paracord woven pull tab that won't get caught on your gear or surrounding environment, and can be released even under load. CLIP-IN OPTIONS We let you choose which attachment point clip-in option should be on the end of your tether, based on familiarity and comfort. Measurements: 28″ or 32″ Tether Material: 1″ Mil-Spec Tubular Webbing rated to 4,000 lbs Climbing Rated heavy duty Snap Shackle 1″ Solid Brass heavy gauge O-Ring MADE BY HAND IN THE U.S.A. NOT RATED FOR CLIMBING OR RESCUE APPLICATION