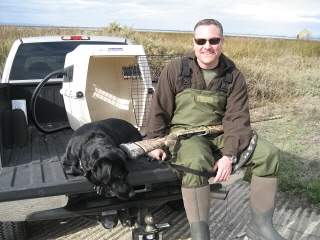 Kozy Kennel installs in minutes to a vehicle's air conditioning vent and directs conditioned air or heat to a dog crate, carrier or K9 enclosure. Kozy Kennel is great for show dogs, hunting dogs, police canines or anyone who travels with pets. Kozy Kennel keeps dogs safe, climate controlled and at top performance!

Kozy Kennel comes with the dash base plate, an assortment of vent louver clips, screws, an allen wrench, weather stipping, a dash air vent collection cup, 6 feet of hose, 4 zip-ties and a kennel discharge cup. Kozy Kennel is a quality product, made in USA and comes with a full satisfaction guarantee.

CoolK9 has been used in police canine vehicles for years and is now available with a universal vehicle dash vent attachment as the "Kozy Kennel."

Sergeant Kris Marvel of the Memphis Texas Police Department bought a CoolK9 to keep the back of his Expedition cool enough for his Malonios. Kris said, "It was 96 degrees back there, way too hot for her!"